Eyetest: Collaboration beyond a 20/20 vision

A tweet by Kaya Burgess, cycle campaigner, made me think. Here's what Kaya said when asked if he would have got involved in cycle campaigning without of a colleague getting hurt. 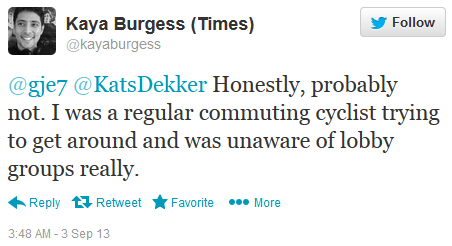 As for myself? Exactly that too. Me, regular cycle commuter. Me, back in 2010: "CTC? You mean C2C right? What's CTC?" Talking about the C2C, part of the NCN. My relationship with Sustrans back then? "Yea, they are good, they campaign for cycling provision and better streets." I even used to give them my money to speak on my behalf. I was somewhat cheated in my thoughts and expectations I later found out.

Yes. I wish all of us could speak with one voice.

But for that to happen we would have to do something quite un-British... we'd have to bang our heads together and bash it out. Openly (online), honestly, transparently. We? The cycling organisations that make up the hilly lobbying landscape.

Key players are (in case you, like Kaya, like me, did not know): Sustrans, CTC and their CycleNation branch (not really sure about the relationship between those two), Cycling Embassy of Great Britain and local campaigns - most notably the London Cycling Campaign but also Spokes (Edinburgh) and Cambridge. No to forget that there are new and different types of campaigns springing up such as Pedal on Parliament, Space4Cycling. Cycle campaigning. It truly is a moving feast.

In 2010 and new to cycle campaigning (and campaigning in general I do not hasten to add) and just after having attended a CTC/CycleNation bash in Edinburgh, I contacted CTC policy and campaign's department to inquire about
1) how they'd wish to work together with the recently formed Newcastle Cycling Campaign
2) more generally, how they collaborate with other local campaigns groups

Then there was a kind of stunned silence. I thought this was odd. I neither got much joy from CycleNation. Foggy vision, direction and planning. Something felt a little bit stuck and rusty.

So what do these national campaigns do? Sustrans is busy talking people onto their bikes (Bike It etc). Laudable but I have it on reasonable authority that they do come up against the inevitable "but the roads aren't save enough" more often than not. And they then struggle, as their hand are bound. They cannot turn against their government paymasters to effect changes to our often hostile roads. And CTC are onto tackling road justice and the legal system (previously Stop Smidsy). Laudable aims. Laudable. Both, in a moment of madness or blindness, supported the not-so-nicewaycode. There are other groups. Some groups pick up strict(er) liability or speed reduction. CycleNation asked local groups to tackle contraflow cycling.

All laudable. But the major part of the jigsaw is still missing.

Why are people not cycling? I do talk to people. And they tell me the answer, day in day out - the road conditions are too hostile and there are no cycleways for you to keep a safe distance to that hostility and aggression.

And so the really big thing is left untouched by the big national campaign groups. Infrastructure. Re-arranging our cities and towns. Downsizing the scale to suit human use. This is what is largely left unaddressed by Sustrans and CTC. Looking at design codes - here and abroad. Why are these codes guidelines not standards in the UK? Identifying the gaps in the codes and procedures. What we have versus what we need. What changes are required. What is it that DfT will have to do and lobbying DfT for these changes. What engineers of the future should look like. Assessing universities' courses... and... breathe...

These kind of debates happen, since 2011 and almost exclusively at that, at the Cycling Embassy of Great Britain (and that's why I joined them). And not to forget, although local, the London Cycling Campaign's 'Go Dutch' Mayors election initiative has carried on the flame of that vital debate too. How to create conditions that everyone can cycle? What does the provision look like?

But it's not Sustrans in the lead in this debate. Not CTC. As cycle campaigners, where are our priorities, inter-dependencies, pressures, limitations, conflicts of interest with wider parties? I fell that Sustrans and CTC will have to relinquish some seats on some tables and let the new folks in.

We gotta get this out there, and we got to get this sorted. Have Sustrans and CTC become establishment? Furniture in the creaky corridors of the DfT ? Part of the window dressing for councils? Gathering dust? I don't care if they had. If so, I just want  Sustrans and CTC to say it. Say why they aren't more intricately involved in cycle infrastructure design debate on a national level.

Therefore addressing the public's concerns. And breaking out.